In October 2021, Matilda was diagnosed with a brain tumour. After ten nights in hospital, two operations and two MRI scans, the family were overjoyed to take her home, happy and healthy. To say thank you the King’s staff who saved their daughter’s life, the Wright family are putting on their walking shoes and going the extra mile for King’s College Hospital Charity in this year’s Great Hospital Hike! 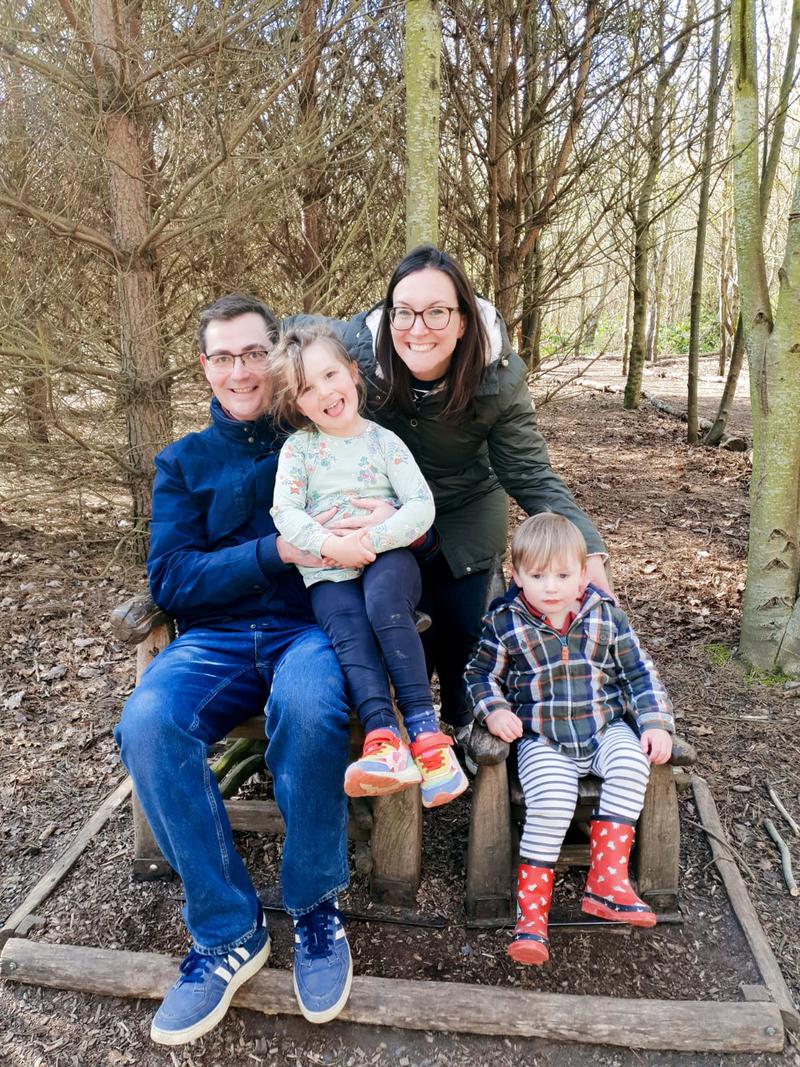 Samantha, Hugh and Oscar are so happy to have Matilda home and well

When five-year-old Matilda began having headaches, her parents, Samantha and Hugh, took her to the paediatrician for a check-up. Unable to find anything obviously wrong, he suggested they take her to the opticians to have her eyesight checked. “It was at that appointment that they discovered she had a swollen optic nerve,” says Sam.

The optometrist advised them to go straight to Tunbridge Wells Hospital to have a scan, which revealed a growth in Matilda’s brain. Her case was quickly escalated to the neurosurgery team at King’s College Hospital and an ambulance took Matilda to London the very next day.

Sam says, “When we arrived, we were taken to A&E to get checked in and meet the surgical team. They explained that, to relieve the pressure that had built up around her brain, Matilda needed to have a drain inserted in her head as soon as possible. She also had to have an MRI scan while she was under general anaesthetic.”

Once Matilda was in recovery, the consultant confirmed that Matilda had a two-centimetre tumour at the top of her spinal cord.

“He told us that they would operate the following day to remove the tumour.

"We were very distressed but he took the time to explain everything and we felt reassured by the expertise and care that Matilda had already received.” 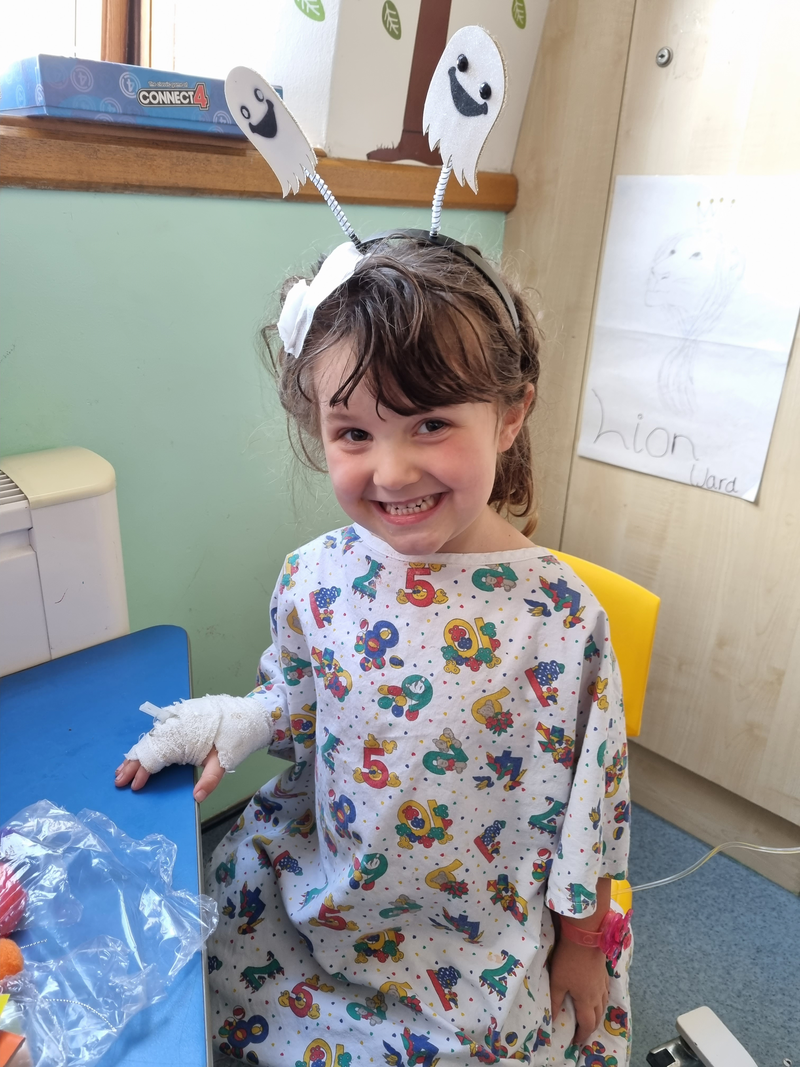 After a night on Lion Ward, Matilda’s second operation was scheduled for the following morning. The complex surgery took approximately seven hours, after which the family were relieved to hear that the tumour had been completely removed. “To our immense relief, a few days later, the lab results confirmed that Matilda’s tumour was benign.”

Matilda then spent a few nights in the high dependency unit, with specialist teams on hand to monitor her recovery. “Matilda’s eyes were puffy from lying on her face during the surgery, so it took her a couple of days before she could open her eyes,” says Sam. “It was eventually Hey Duggee on the television in her room that convinced her that she wanted to look at something!”

Matilda continued her recovery on Lion Ward under the care of nurses, doctors, physiotherapists, the play therapist, healthcare assistants and caterers, “All were wonderful with her and us – they were so professional and clearly dedicated to their jobs," says Sam.

“King's were absolutely fantastic and we were all treated with the utmost care and compassion during a very scary and worrying time. The staff on Lion Ward and the paediatric neurology team were particularly incredible.”

By early November, Matilda was well enough to go home. “Everyone made a huge fuss – it was like ten birthdays all at once! She had been so brave and resilient throughout the whole experience, so she definitely deserved a big welcome home!”

Within a fortnight, Matilda was able to start school part time and, before long, she was her old self again – enjoying the outdoors and playing with her friends. Sam says,

“We will be eternally grateful for everything King’s has done for us – this is why we wanted to take part in the Great Hospital Hike and raise some money for the brilliant teams we were fortunate to meet." 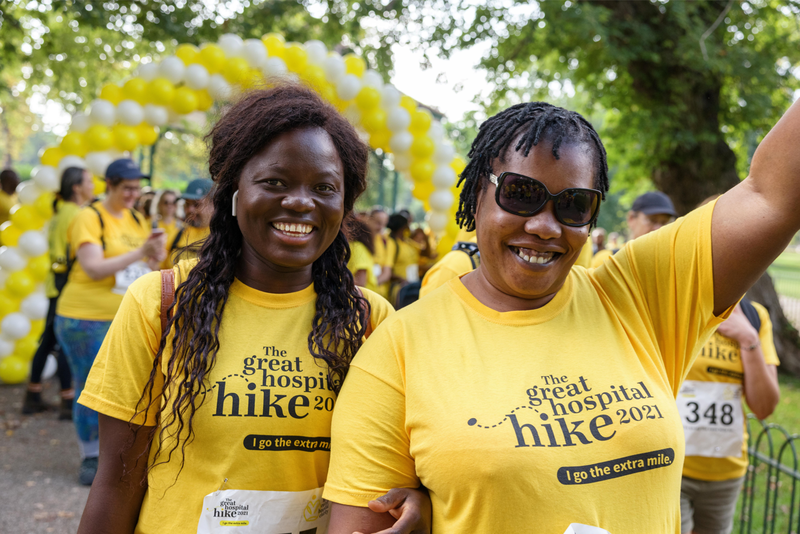 Join us at the Great Hospital Hike

King’s College Hospital Charity is dedicated to supporting life-changing care in our hospitals – patients like Matilda are at the heart of everything that we do.

Taking part in fundraising events like the Great Hospital Hike will ensure that we can deliver the best possible care for patients by supporting our staff, funding cutting-edge equipment and facilities, and championing innovative research and pioneering treatment.

On Saturday 17th September 2022, the Wright family will be taking part in the Great Hospital Hike, walking the 18 miles from King's College Hospital in Denmark Hill to the Princess Royal University Hospital in Bromley. “We want to raise money for the amazing King's College Hospital Charity so they can fund more research and support more families like us,” says Sam. “We owe everyone a whole lifetime of thanks.”

If you would like to join them this September, then the Great Hospital Hike is not only a fun sponsored walk, it’s a rewarding way to come together to raise money for our hospitals. There are three routes to choose from and, whichever hike you choose, every penny raised will make a world of difference to improving care for patients – just like Matilda.

"Despite being at the centre of a national crisis, King's has been there for all our more mundane needs. And every time, you’re met with the same calm competence and good humour."

“The blisters, aching hips, tight hamstrings, face planting the road and running in all weathers has been totally worth it!“