The Charity’s works means families of liver transplant patients can have a place to stay, which means they can be close to their loved ones during their treatment.

Being admitted to hospital with a serious condition is stressful and scary, especially if your family live too far away to visit regularly. King’s LISTEN Lodges are made up of three flats located next to the hospital on Caldecot Road. There are a total of nine rooms – six twin and three single – dedicated to relatives of people being treated at the King’s liver transplant unit.

“Some of our patients have never been to London and view it as the big bad city. It can be quite strange and alien and they’re not always comfortable, so it’s very reassuring for them to know there is somebody nearby – it’s important to their psychological wellbeing. So it’s lovely to be able to offer relatives rooms; visitors have said it’s like a home from home.” - Jacomi Malan, co-manager of LISTEN Lodges

The lodges are maintained by LISTEN, a group of patient volunteers and staff from the King’s Liver Unit. Funds raised go towards furnishing and maintaining the rooms, while volunteers give up their time to help with jobs like painting walls and hanging pictures. 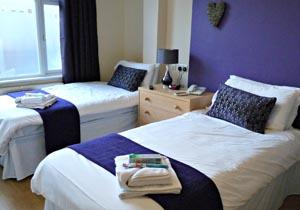 The liver transplant unit at King’s carries out more than 200 procedures a year. It assesses and treats adults and children from all over the country, so priority for the lodges is given to families of patients who live outside the M25.
All rooms are decorated in a modern and homely fashion. They even offer toiletries and towels in case someone has had to leave home quickly and forgotten to pack the basics.

Lodges were “a godsend” for Sherrel’s family

Sherrel Kennedy, from Guernsey, had been a long-term patient of the liver unit when she was diagnosed with lymphoma in 2013, which meant a six-month stay at King’s. Her son Adam said:

“It’s the longest my mum’s ever been away from Guernsey. My dad spent almost all that time at the LISTEN Lodges. It was a godsend for him to be on the grounds of the hospital, be able to get to my mum and do everything that’s needed for her.”

How Adam showed his gratitude

Adam Kennedy felt so indebted to the team at King’s that he and two friends took on the Three Peaks Challenge. They raised £3,600 for the LISTEN Lodges by trekking 27 miles up and down the three tallest mountains in England, Scotland and Wales.

“Getting to the top of the first mountain was quite a euphoric, emotional experience; not only taking stock of the stunning scenery but also the emotional drive behind why we were there. We were doing it for something so close to our hearts and for other families that seek treatment at King’s or support from LISTEN, so it was really humbling to see just how much people would donate.” – Adam Kennedy


Your contribution will help us continue our work supporting patients at King’s hospitals. When you make a gift to King’s College Hospital Charity, you are helping to change the lives of thousands of people. Big or small, one off or regular, all donations help. Your gift can be directed to your chosen department or ward.